Written by Charme Rykower and published on 24 Jun 2022

In May 2020, the beginning of the commercial space age was marked by SpaceX, as the first private company to ever send humans into space. Since then, the private space markethas taken off, with companies working on decreasing launch costs and creating a large-scale industry beyond more centralized, government-led space missions. Therefore, we can expect rapid developments and breakthroughs in space technologies over the next decades, paving the way for increased R&D conducted in space, space tourism, and – eventually – settlement in space. Not surprisingly, the global space tech economy is reaching dizzying heights, with an evaluation of $392B in 2021 and an estimated growth of up to $10T by 2030. These economic prospects together with the fact that governments are easing regulations and increasingly encourage private space activities, create more than ideal conditions for young, innovative startups to thrive.

The ILA Berlin, that is held from June 22 – 26 2022, constitutes the perfect platform for businesses, investors and entrepreneurs in the field to meet. Europe’s leading Space & Aviation Exhibition at the BER Airport features over 1100 exhibitors from the aerospace and defense industry from 41 nations who will showcase recent trends in aviation, space tech, defense and advanced mobility. “Green flying” is the buzzword within the aviation industry, working toward zero-emission air travel technologies, climate neutral aircraft manufacturing, for instance with the help of 3D printing, CO2-neutral fuels as well as silent engine and electric flight technologies. Trends in the space industry include earth observing satellites for environmental monitoring and early warning, commercialization of space travel, along with space-based security and surveillance systems.

Israel’s history with space research began in 1988 with its first satellite lift-off, coordinated by the Israel Space Agency (ISA). In February 2019, SpaceIL and Israel Aerospace Industries (IAI) launched their first spacecraft Beresheet 1, making Israel the seventh nation to reach the moon. Several malfunctions, however, let to a hard landing on the moon’s surface. Today, Israel ranks among the top 5 countries in the Space industry according to investment size, having raised $1.8B in 2021. And it is expected to grow a lot more in the next few years. Last year, the first Israeli SpaceTech Venture Capital firm, TYPE5, was launched, looking to fund start-ups in the field of Aerospace and low earth orbit technologies. Planning to strengthen the Israeli SpaceTech ecosystem, TYPE5 will hosted the SpaceTech Summit in May 2022 at Expo TLV, bringing together startups, investors, small and medium sized businesses as well as policy decision-makers from all over the world. On the agenda were topics such as space robotics, MedTech and off planet life support, Space-driven Climate and AgriTech, energy sources in space as well as the MetaVerse.

According to the Israel Innovation Authority, an especially promising innovation within the Israeli SpaceTech sector is the development of miniaturized satellites. Early last year, Israel launched three nanosatellites into space in a joint mission between the Israel Institute of Technology and the Israel Aerospace Industries. The satellites were equipped, among others, with technology developed by Ramon.Space and sent on a geolocation mission in order to locate people, planes and ships for search and rescue, remote sensing and environmental monitoring.

The Israeli startup industry is innovating the global SpaceTech market also in other technological fields. Since 2011, StemRad is developing radiation-protection solutions for astronauts and for first responders being exposed to dangerous radiation on earth. Since its founding it has raised $7.8M and its protection gear was first launched onto the International Space Station in 2019. Bringing the military intelligence analysis of synthetic aperture radar (SAR) to the crop insurance industry, PlanetWatchers developed a Natural Resource Management System that can monitor and identify growth anomalies, make crop-yield predictions and perform different kinds of risk calculations on a regional and global scale through automated analysis. They have raised a total of $5.25M since their founding five years ago. SpacePharma, founded in 2013, focuses on research and development for the healthcare and pharma industry under zero-gravity conditions. It has developed miniaturized lab systems that are equipped to function in space. Last month, its smart laboratory was on board the SpaceX mission, in order to test a new nanotechnology cancer treatment under different gravitational conditions.

German-Israeli cooperation in the Space industry began in 2019 with IAI and the German satellite manufacturer OHB Systems signing a collaboration agreement on the development and implementation of lunar landing technologies. As part of their joint lunar mission, the Israeli startup Helios was brought on board late last year, to send its mining hardware to the moon to extract oxygen and metals. Helios is aiming to develop technologies for outer space resource extraction to eventually enable human life beyond Earth. That there is a great deal of potential and eagerness on both sides for additional joint projects in the future was demonstrated at the German Israeli Space Forum. The forum was initiated by ELNET and the Federation of German Industries (BDI) in order to discuss financial, political and legal frameworks for synergies between the German industry and Israeli innovative technologies in the field.

Last February, in an effort to “promote the civilian dimension of space and to connect it to the Israeli high-tech industry”the Israel Space Agency, the Ministry of Innovation, Science & Technology, together with the Israel Innovation Authority approved a $5.91M grant (NIS 18.5M) to be awarded to 11 companies developing innovative space technologies. Among the startups receiving support are Terra Space Lab developing space-based earth observation services, GreenOnyx, a young company growing fresh superfood to be used on spaceships for astronauts on deep-space missions, as well as NewRocket, who developed a proprietary gel technology for spacecraft engines. Their propellant is environmentally friendly, cost-effective and safe while improving the performance of rocket propulsion systems. 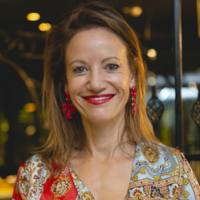 Charme Rykower is Senior Executive at the German-Israeli Chamber of Commerce and Industry (AHK Israel) in Tel Aviv and has been an integral part of the Israeli ecosystem in various technological sectors for more than 15 years.

The German Israeli Network of Startups & Mittelstand (GINSUM) is a platform initiated by ELNET (European Leadership Network) and supported by the German Federal Ministry for Economic Affairs and Climate Action (BMWK) to link the German Mittelstand and municipal actors with Israeli startups.

Within the next few weeks we will develop this platform into a vivid community where you can connect with startups, Mittelstand and experts from Germany and Israel.